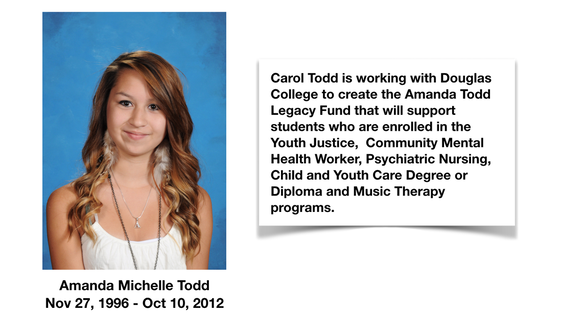 The video made by 15-year-old Amanda Todd shortly before she died by suicide is gut-wrenching. The Port Coquitlam teenager was mercilessly bullied and stalked – in person and over the Internet – for months until she could take it no longer. Just a month shy of her 16th birthday on Oct. 12, 2012, Amanda took her own life, after posting a video of her holding up cue cards detailing her foray into social media as a young Grade 7 student and how one mistake led to a ghastly spiral of relentless bullying, in person and over the Internet, to cutting, mental health challenges, misuse of alcohol and drugs and several unsuccessful suicide attempts.

Amanda’s mother, Carol Todd, has worked tirelessly to turn Amanda’s short life and tragic death into something positive. She has shared Amanda’s story with audiences around the world.  Amanda wanted her voice heard and the video she created has sparked discussions all over the world on topics related to bullying, cyberbullying, mental health and exploitation. These conversations will ensure that the barriers of silence are broken.

Carol Todd has been working with Douglas College to support the creation of the Amanda Todd Legacy Fund via the Douglas College Foundation to support students studying in the fields of Social Justice, Community Mental Health Worker, and the Child and Youth Care degree and diploma programs.
​
AWARDS which have been created in memory of Amanda Todd include:​

Each year, bursaries have been awarded to students attending the college and pursuing studies in the field of Child and Youth Development and Care.  With the support of the Douglas College Foundation, rotaries in the Tri-Cities area and the Amanda Todd Legacy Fund (Vancouver Foundation) have been able to keep these awards moving forward.

Together with the Douglas College Foundation and generous supporters who have generously donated to this fund, this endowment has grown to $57,875.00.  This will ensure that along with Amanda Todd Award of Distinction and the legacy that Amanda left behind will continue on forever helping others, specifically those students who are enrolled in the following programs  -  the Faculty of Child, Family and Community Studies, the Faculty of Health Sciences and the Faculty of Humanities and Social Sciences. 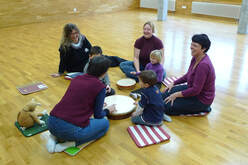 The  Amanda Todd Legacy Society established this award, in 2018, to pay tribute to, and honour, Amanda Todd, who died by suicide in 2012 after years of bullying and cyberbullying after becoming a victim of sextortion.  Amanda is described as “a transformative angel” who loved music and wanted to one day see her name in lights. The inspiration for this award resulted from The National Arts Centre’s production of “Life Reflected”, which included the composition “My Name is Amanda Todd”, composed by Jocelyn Morlock.  Carol Todd, Amanda’s mother, collaborated with Jocelyn during the composition process and after Jocelyn’s 2018 Juno win for “My Name is Amanda Todd” and seeing Amanda’s name in lights/on the big screen, the two decided to recognize and support Music Therapy students at Douglas College who are pursuing a career of helping those who are the most vulnerable.

Music therapy is the clinical and evidence-based use of music interventions to accomplish individualized goals within a therapeutic relationship by a credentialed professional who has completed an approved music therapy program. Music therapy consists of a process in which a music therapist uses music and all of its facets — physical, emotional, mental, social, aesthetic, and spiritual — to help clients improve their physical and mental health.

​​Music therapists help clients improve their health in several domains, such as cognitive functioning, motor skills, emotional development, communication, sensory, social skills, and quality of life. They do this through both active and receptive music experiences such as improvisation, re-creation, composition, and listening and discussion of music to achieve treatment goals.

Donations in support of the Amanda Todd Legacy Music Therapy Award of Distinction can be made through the Douglas College Foundation.  The Douglas College Foundation is a registered charity that helps students reach their educational goals by reducing financial barriers and recognizing academic achievements.  Since 1985, the Foundation has been devoted to supporting students explore, discover new passions, new strengths and new dreams. Through the generosity and support of donors, the Foundation assists over 2,000 students annually.  Collectively, the Foundation expands educational opportunities for students by supporting scholarships, awards and bursaries while expanding funding beyond the classroom experiences. 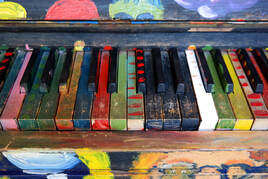 ​To continue to help with being able to award these students for many years to come, please consider a donation to this valuable asset for others.  All donors will receive a charitable tax receipt that can be used when doing their income tax.

Click on the link provided to DONATE to the award fund and choose the FUND DESIGNATION dropdown Amanda Todd Legacy Music Therapy Award.

Spring 2016 - This annual fund started with $1,000 being given to 4 amazing students, some of whom have their own mental health challenges. Each year following until 2019, students have been awarded annually to support their education in their studies.

Spring 2019
Summer 2019
January 2019 - $5000 has been donated to the Music Therapy Endowment Fund from a private donator who has a passion in music and young people. 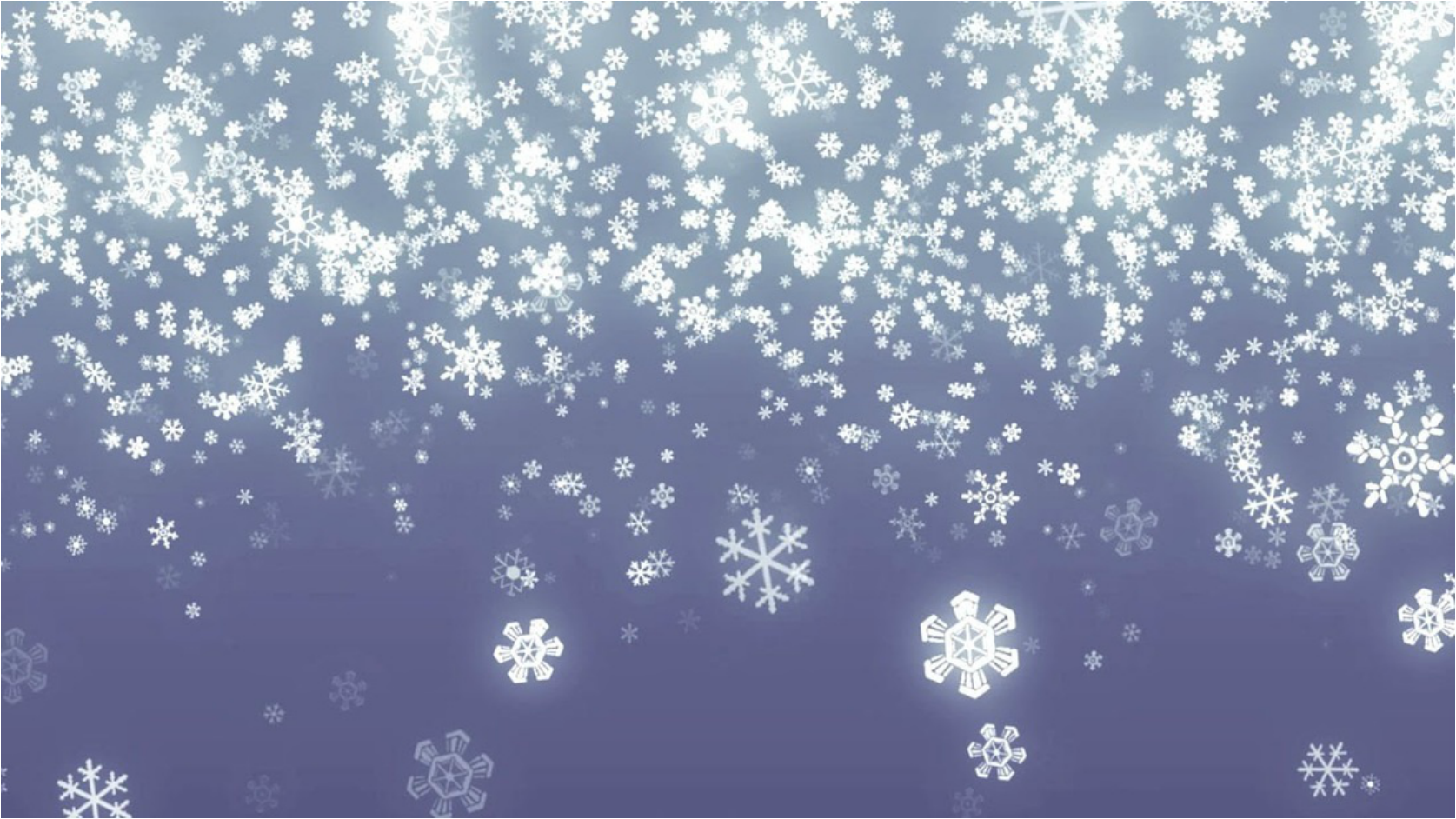